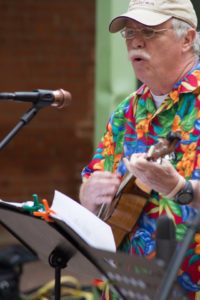 All the songs from this meeting can be downloaded on the Songs & Music page. (Thanks Jim Donovan)

The Ukesters under the firm tutelage of Jersey Mike Kelly (from Delaware) zoomed together on August 10, 2020 for the monthly musicals.

The 12 attendees introduced themselves and their place of residence and revealed the silver lining encountered in spite of the pandemic. Spending more time with family members and brushing up their uke skills were the main replies.
Mike Kelly kicked things off with Hank Williams, I'M YVONNE (OF THE BAYOU) Possibly a sequel to JAMBALAYA?
Karen Kesler was next with FREE TO BE YOU AND ME by Stephen Lawrence and Bruce Hart and performed by The New Seekers in Marlo Thomas' 1972 television special of the same name with a message to children to be themselves and follow their dream.
Chuck Wood was up next with an amazing electric kazoo demo video:
jttps://www.facebook.com/rubacarelita/videos/10157467139750963
Chuck Wood led SUNDOWN by Gordon Lightfoot. Mr Lightfoot is remarkably still touring at the age of 81 and has a young wife in her early 50s. Played at the Liberty Hall in Lawrence, Kansas in June 2019. Great show! Video:
Gordon Lightfoot: If You Could Read My Mind | Greenwich Entertainment
Danny Fowler performed an open mic with IT DON'T MEAN A THING IF IT AIN'T GOT THAT SWING by Duke Ellington and Irving Mills. Great Jazz! Great composer! Danny shared an app for soloing and improving your uke technique
(my computer would not let me post the website)
Chuck Wood performed an open mic with STEVE'S LAST RAMBLE by Steve Earle. About an old rambler who is thinking about giving up rambling and going home to the woman he loves. Classic Earle! His songs have been performed by everyone.
His song NOTHING BUT A CHILD is one of the most moving Christmas songs ever written.
Mike shared some 7 minute Uke concert pictures from the Firman-Howell front yard and the front yard of Squirrel Manor, humble abode of Sir Charles Wilson.
Nancy Howell performed an open mic of YOU GOT TO HIDE YOUR LOVE AWAY by The Beatles, specifically John Lennon who described the song as his "being in his Dylan period".
David Firman was up to also open the mic with SINGLE SADDLE by Altman Arthur and David Hal. Recorded by Vaughn Monroe and later on, the Dillards. About a feller who steers clear of love.
Ken (The harmonica that roared) Kelly was up next with an open mic rendition of TIPTOE THROUGH THE TULIPS written in 1929 by Al Dubin and Joe Burke. His famous harmonica remained silent as Ken Doo-dooed and La La'd his way through the lyrics.
Linda (The belle of Barcelona) Tilton was up next with her open mic rendition of ULUPALAKUA by John Pi'ilani Watkins. The song is about an area in Maui.
Mike Walker was up next to play an open mic version of KEEP YOUR SUNNY SIDE UP by B G DeSylva, Lew Brown, and Ray Henderson in 1929. First performed by Janet Gaynor.
Mike Kelly led NO PLACE TO FALL by Townes Van Zandt. A man admits to his faults and shortcomings but asks his lover to be there for him when he's down.
Ken Kelly produced the "Harmonica of Light" inviting all to produce whistles and kazoos and join him in a rousing zoom-busting version of BUFFALO GALS!
Mike Kelly admirably led the "Zoomers" through some nice material. Great Job, Mike!
The next meeting will be September 14, 2020 at 6:30PM in the ZOOM! Mike Kelly will again lead! Thank you, Mike!
Thanks to all of you participating Zoomers!
REMEMBER:  MUSIC SELF-PLAYED IS HAPPINESS SELF-MADE!
Until September, I remain, yours re-entrantly,
Steve